I am always reflective at this time of year. It’s Fall and it’s the anniversary of the attacks on September 11. Without being maudlin or didactic here are some of my memories of that time:

I woke up and turned on the news. As I wandered from room to room, I thought it was a trailer for 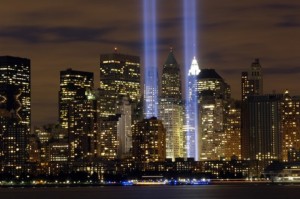 a movie. (The first plane had struck the first tower.) It was only after arriving at work downtown (next to the Chicago Stock Exchange) that I learned the truth. Then the second plane hit. And they evacuated downtown Chicago.

I was on the phone with my father (a few blocks from the World Trade Center) when the first building collapsed. He said they were being evacuated and then said nevermind, they couldn’t see out of the doors… they were covered in debris and dust.

My friend Sean was a firefighter in New York. He and his company raced downtown to assist. In the chaos they all lost track of each other and Sean was missing for a few days. We all feared the worst. Overcome with worry and responsibility, Sean was sleeping on the street in short bursts and returning to the Ground Zero every day for a week before someone made him go home.

In the 80s, my father worked on the sixtieth floor of the Trade Center. In 1986, the 200th anniversary of the Statue of Liberty, we went up to the 80th floor to watch the fireworks. We were ABOVE the fireworks.. it was an unique point of view. 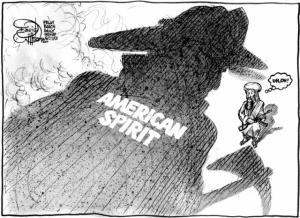 I had a one-man show called “Nerdography: the Story of a Nerd.” It was a parallel of my life as a nerd and the story of nerds in America. It was a relatively frivolous show filled with great nerdery. I did two shows and then 9/11 happened. I didn’t want to the do the show anymore. That weekend, 5 people came to see the show. They wanted, needed to get out of the house. The show goes on. That’s our job. (“But, Doctor, I AM Pagaliacci.”)

The tech manager for the show had a day job with Goldman Sachs. On September 11th, around midnight he called me very drunk. He told me that Goldman had offered him a promotion and a move to NY. He decided to stay in Chicago with his girlfriend (they had just moved in together) and he had promised to do tech for me. If he had taken the job he would have been at the 7:30am meeting in the Tower.

My roommate, John Mulhern and I went checked in on Erica Reid and Sara (“Scoot”) Champagne. They had just moved to Chicago and were bewildered. Hell, we all were. The four of us sat around and talked.

Later that night, I just wandered over to iO. The classes had been cancelled, but a group of people had begun to congregate. The next thing we knew there were board games all over the place and the bar was opened up. We, quite inappropriately, played a great game of RISK. To me, that community, that impromptu sense of family is what boardgame night at iO represents. That’s why I fight for it. That’s why I get pissed when it gets dislodged. 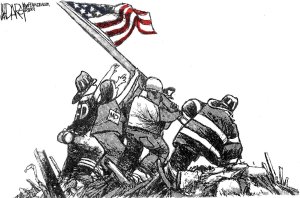 I had a blog at the time. And I began to collect and reprint editorial cartoons about 9/11. Within a week I was inundated with e-mails from people around the country saying thank you and expressing their own sorrow. I didn’t make the cartoons and people knew that, but I was someone they could talk to. It was very weird.

I have written a very short play about a real-life incident that occurred in the Towers on that day. It makes me cry, but I don’t like it. I don’t feel like I’m doing the people or the occasion justice. I wish I were a better writer.

I wonder, in the alternate universe where Al Gore was president…. How different would the world be now?

The first shows at iO were tentative and strange. People were just happy to get out of the house and see something fun and funny.

I moved to Illinois in 1993. I have this weird guilt for not being there for New York.

This year, on 9/11, I will teach six hours of improvisation followed by a meeting for an upcoming Halloween show. My annual sadness will, hopefully be allayed. I am reminded of a poem from my high school poetry magazine… written from the perspective of the Sun…. it says, “go ahead, drop the bomb. I still go on.” 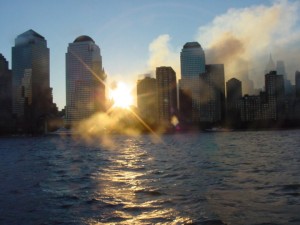